Who says crochet is only limited to garments? Well, this notion was proven wrong by artist Aze Ong. She has been making rounds in the country, touching people with her art.

I was given a chance to witness how beautiful her creations are. I stumbled upon a Facebook sponsored post by Art Portal, calling all people to drop by their place for her exhibit. I had nothing to do at that time (and it’s free) so, I jumped in.

The exhibit was called “SOUND IN MY HEAD 2” 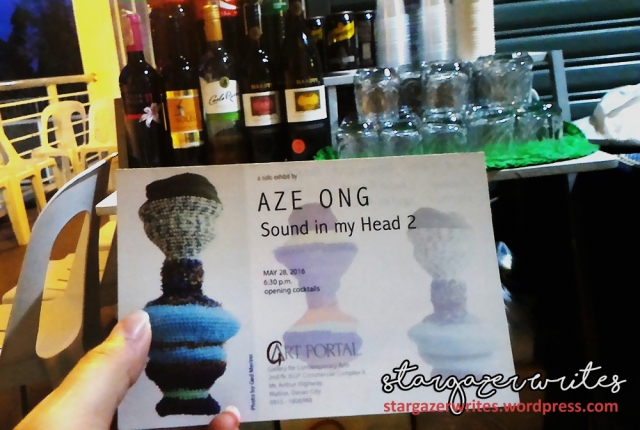 I asked friends to go with me, but I ended up going with my sister. 😀

We were surprised by the number of people who went there because the place was actually small. We just compressed outside during the opening ceremony.

Who is Aze Ong? 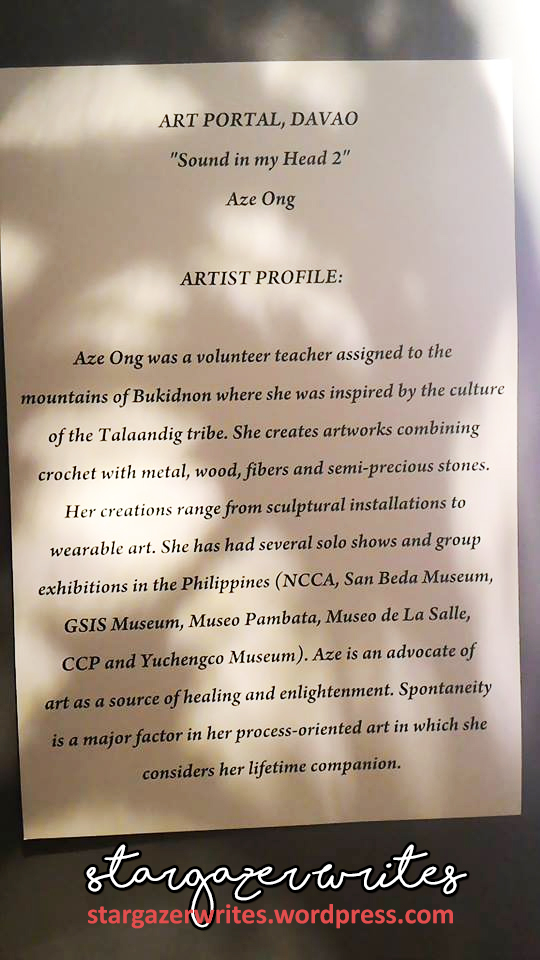 During the opening ceremony, she gave a speech. She said that it was 17 years ago when she volunteered for a year to teach people in the mountains of Bukidnon. Most of her students belonged to the Talaandig Tribe. During the span of her stay, she was inspired by how the tribe preserved their culture. She said that all her creations came from her mind, heart and soul-there’s no limit, no pattern nor sketches. She doesn’t know how they look like until they are finished.

The speech was then proceeded with ribbon-cutting:

The ribbon-cutting was done together with local artist, Dinky Munda (who currently has art pieces exhibited in a local mall) and Aze’s former student, Shela Camarinta, who is now a councilor of Kibangay, Bukidnon.

She was also interviewed by people from CNN Philippines.

After the ceremony, Aze did a performance with her art pieces. I think the performance was very fluid and full of grace.

After her dance number, we are then allowed to go inside and take pictures as well as interact with the artist. 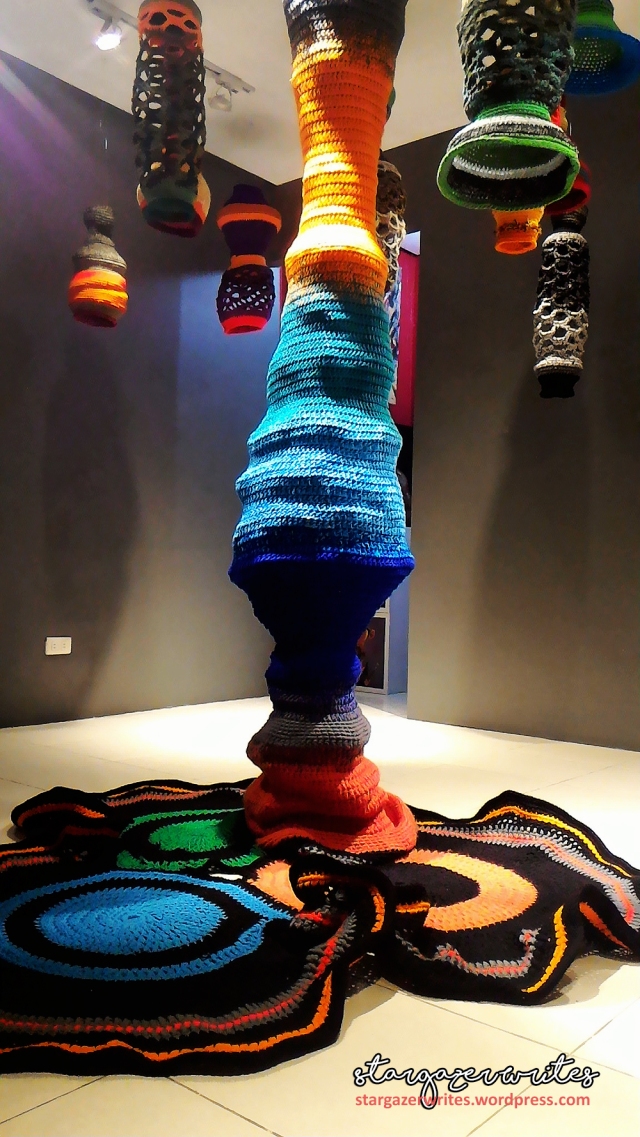 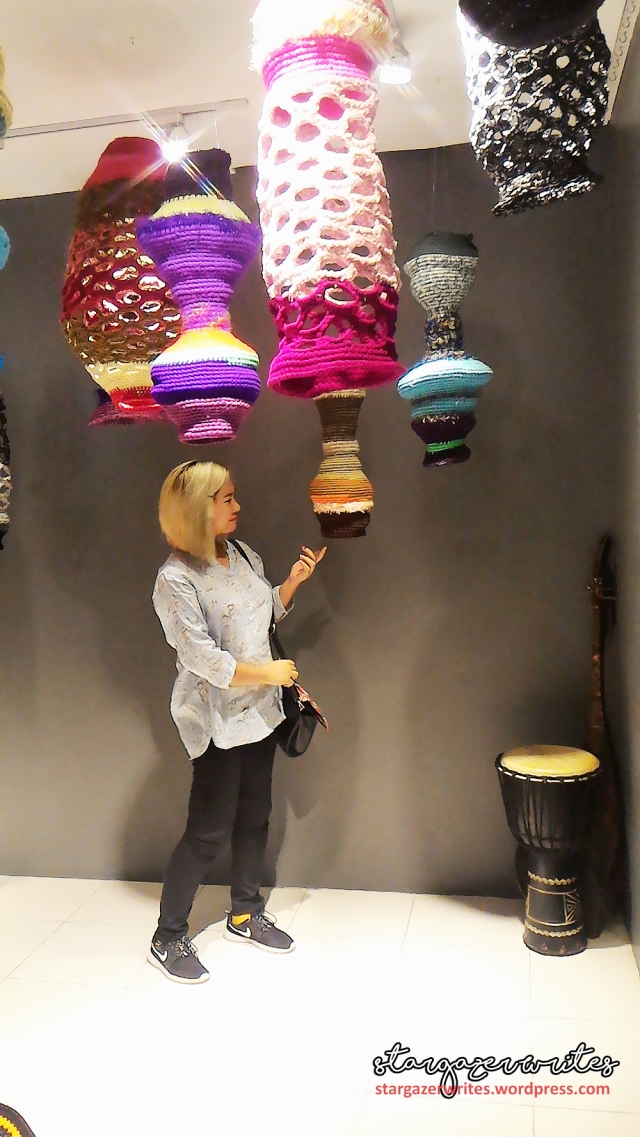 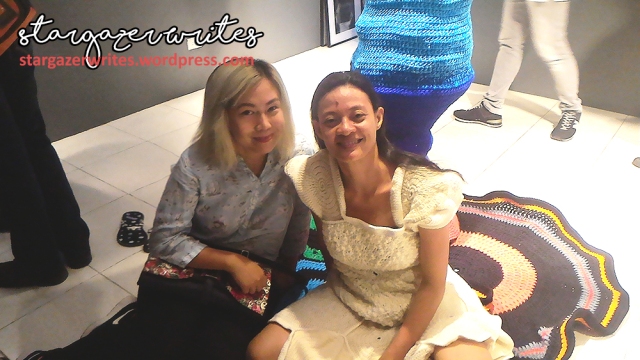 They also have food and booze waiting outside for visitors.

As a frustrated artist, there’s really something fulfilling when I go to art exhibits. Maybe deep inside I am hoping that I’ll be able to showcase my works with other people and be appreciated in return too. My sincere congratulations to Aze Ong for holding a successful one! I am looking forward for her future works.

If you’re not into crochet, but are into sewing, you might want to read this sewing machine guide.

How about you lovely readers? What do you feel whenever you visit an art exhibit? Have you tried creating art in your own ways as well? Please let me know by leaving a comment below! 😉

Who’s in charge? Me!

My dream is to have eternal youth. Since aging is beyond my control, I invest my time and money on skin care.

There was an error retrieving images from Instagram. An attempt will be remade in a few minutes.